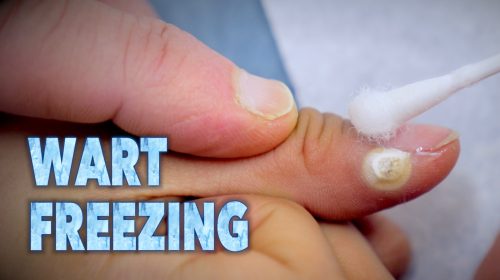 Removing warts with liquid nitrogen is one of the traditional methods of treatment. Its another name is cryotherapy or cryodestruction. The effectiveness of treatment is high. It is carried out in cosmetology and dermatology clinics. Why nitrogen is used to get rid of warts? The active factor is liquid nitrogen. According to physical properties, the transition of nitrogen from the gaseous state to liquid and back occurs at a temperature of -196 degrees.

On Earth, there is no such temperature, otherwise the nitrogen of the air would turn into a liquid state. But in special plants, there are such plants that cool down to low temperatures and transfer nitrogen, as well as other gases into a liquid state. Cryosurgery with nitrogen is a universal procedure used for the treatment of: warts, molluscum contagiosum, erosion, and dysplasia of the cervix, internal organs tumors, and even in surgery of the liver and brain.

When Is Cryodestruction of Warts Necessary?

The removal of warts with nitrogen is used for single and multiple formations localized on the face, arms, legs and soles of the feet. The procedure is appointed by a cosmetologist or dermatologist after a preliminary examination and evaluation of the condition of the tumor. Wart freezing is recommended for small to medium skin growths. Large formations are burned with a laser or by electrocoagulation. Treatment of one wart takes about 10 seconds, so working with multiple eruptions does not take much time.

As a rule, the removal of warts with liquid nitrogen is performed for aesthetic purposes, since the formations are most often localized in the open areas of the body and cause psychological discomfort in a person. In addition, the procedure is indicated when there are painful sensations in the pathological area, a constant growth of the wart, the occurrence of bleeding or swelling.

Burning out warts with nitrogen is NOT prescribed without obtaining information about the state of health of the patient, since in some cases cryodestruction is contraindicated. It is not recommended to perform the procedure if a person has an allergic reaction to cold, acute inflammatory processes of internal organs, infectious skin diseases.

How Does Cryotherapy for Warts Work?

The method of wart treatment with the help of cryotherapy is based on the freezing of wart tissue. That is, in fact, the cells of the altered skin are so strongly cooled that the water freezes inside the cells. Water freeze leads to the expansion, in its turn this leads to the rupture of the cell and its death. The wart simply ceases to “live”, collapses, and dies. Since the cause of warts is human papillomavirus, sometimes cryotherapy should be supplemented with antiviral drugs.

The method of carrying out cryodestruction of warts can be done either with the help of a cryoprobe, or manually – using a fleece on a stick. It is the manual method that is most often used in many cosmetology clinics.

The stages are included into the method of cryotherapy:

Anesthesia: It is performed if the wart is large, is located on sites with sensitive skin, or the procedure is carried out for children. Anesthesia is made with novocaine or lidocaine. If the papilloma is small, then anesthesia is not necessary, since the exposure time will be limited.

Important: After anesthesia, it should take at least 10 minutes for novocaine to absorb into the skin, so that it does not remain in it in large quantities, otherwise it will also freeze and the area of frostbite will become larger.

Then all the processes proceed in the same way. Skin blushed – it means there is an effect. The next day, in 90% of cases, a larger or smaller bubble appears. Do not be afraid of this – it’s normal! So, it should all flow! The bubble can be filled with a colorless liquid or reddish – it depends on the depth of the effect. If the cryodestruction has reached deep layers of the skin, where the blood vessels pass, the bladder is reddish. If not, – then, it is going to be whitish. The best option is the second one when the bubble liquid is colorless, and then after healing of the scin, you won’t have any scar. The upper part of the bladder is just a wart.

What Can and Cannot Be Done after the Wart Freezing?

Follow the tips below for providing the right care after the place where the wart was. If you take all the recommendations into account, you will be able to achieve the best possible result.

If there is a small bubble, if it does not bother you, then you do not need to open the bubble – a new young skin appears and builds up under the liquid layer inside it. It often happens that the 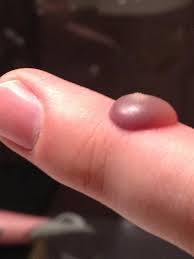 bladder is large, it has high fluid pressure, which leads to severe pain. In such cases, the bubble can be opened on your own. Take a needle, warm it on fire (this is necessary to make it sterile), pierce the bubble in two places, release the liquid, process the place with the aqueous chlorhexidine, impose a sterile napkin and a bandage.

After 5-6 days, the bubble will open on its own (when sleeping or working with hands), you only need to apply a bandage. If there is no inflammation, then no ointments should not be applied. Keep in mind that you don’t need to cut off the skin of the bladder, otherwise the young new skin will be exposed to rough environmental influences, will crack and will heal longer. After 5-7 days, the new skin will become stronger, it will become more elastic and the crust from its surface will gradually peel off by itself, or you can clean it painlessly.

Sometimes, in the place of cauterization with nitrogen on the skin, there is a bubble left. This is because the exposure time was short-1-2 seconds. The skin is not frozen to the full depth, but only to the thickness of the surface layers. This situation often happens when processing small warts. However, one must know that the impact on wart was still there, that it froze, as indicated by the pain in this place. If the wart was small, then a cure occurs. If the formation on the skin was large, then repeated treatment with nitrogen is necessary!

Important: If the wart with liquid nitrogen did not work for the first time, then in three weeks after the first treatment, you will have to go to the cosmetic clinic again, where you will need to burn a  wart with nitrogen. Such cases are rare because in most people the first procedure is effective.

Advantages of the Method of Cryodestruction for Warts

Removing the wart with nitrogen is a quick, safe, and painless manipulation. The removal of one wart will take no more than 1 minute, while the process is not accompanied by painful sensations or bleeding. Most patients don’t even need anesthesia to perform this procedure. The rehabilitation period after the operation takes about 2 weeks, during which special care for the wound is not required. The price for removing warts with nitrogen is within acceptable limits, which makes the procedure accessible.

Cryodestruction is considered a universal method used to get rid of warts, as it is suitable for all age categories. The procedure is easily tolerated by children, so doctors often prescribe the removal of warts with liquid nitrogen to children of 3 years of age and older.

Now you know how the cryodestruction is performed and can take the well-informed decision concerning the use of this method.