According to statistics, every 10th person in the world faces the wart problem. Warts cause both aesthetic and psychological discomfort. Both women and men are concerned about the formation of warts. To understand how it is better to get rid of warts, you should have a clear picture of what a wart is and what may cause such an unpleasant problem as warts.

Warts (wart, verruca, multiple verrucae) are rounded skin rises due to the strong growth of the superficial layers of the epithelium and the underlying papillary layer of the skin. Warts are benign tumors of the skin, resulting from the infection with the human papillomavirus (HPV). Warts are considered a skin disease caused by a viral infection getting into the body.

The virus-pathogen is one of the types of the papillomavirus. Warts occur in people of all ages. The size of the wart, its appearance depends on its location on the body. These parameters depend on the level of irritation (or trauma) that this area undergoes. The disease can occur in various ways. The number of warts can vary greatly – from 1 to 10, and more.

Conventional (vulgar) warts are quite harmless, although one, two, and sometimes even a whole scattering of them can suddenly grow like mushrooms after the rain on the fingers, the back of the hand or foot, elbow or knee. They neither itch nor hurt. The surface of the warts is tuberous, cracked. With time, they darken, get the wrong shape, grow.

How Widespread is the Wart Problem: Statistics

At the first stages, warts appear harmless cosmetic defects. With a decrease in immunity, they increase in size. Nearby, there are new elements of a rash that can capture large areas. Some warts on the genitals can cause even cancer.

According to statistics, 65% of the adult population are carriers of the virus. These unpleasant growths are found in 10% of the inhabitants of the earth, another 75% had warts in the past. Among all dermatological diseases, this problem is the 2d most common after acne.

Warts can disappear on their own when the immune defense is restored and the body gets rid of the virus. Some people have it for 6 months, others – for 2 years. According to American scientists, such a favorable outcome is observed in 80% of cases.

In total, there are about 30 types of skin tumors, which we call warts. Not all of them are harmless. Therefore, before you get rid of a suspicious element on the skin or mucous, consult a dermatologist. Modern medicine has in its arsenal many ways to get rid of warts.

How to Know that the Growth on Skin is a Wart?

It is easier to recognize common warts. In most cases, they appear on the hands but can be located on the face, and the surface of the lips. These are dense nodules of rounded shape from 2 to 5 mm in diameter with a rough surface and irregularities. Most common warts do not differ from the skin color having a yellowish or gray hue.

Flat papillomas are characteristic of children and adolescents. They localize such growths on the face, neck, and wrists. Since they are smooth and almost do not protrude above the surface of the skin, they can be perceived as pimples and pigmented spots. The main difference between juvenile warts in their transparency and emptiness. 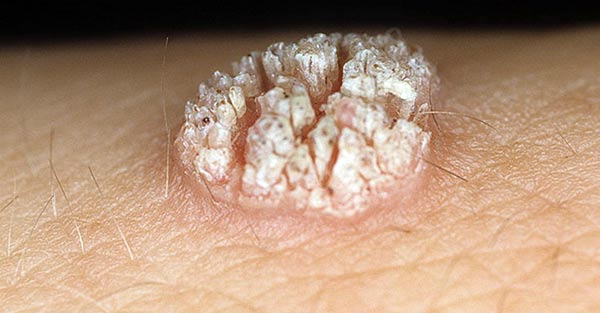 Plantar warts are located on the feet and palms, they are easily confused with calluses due to their appearance. In this case, papillomas can differ in the following characteristic features: the shell is coarse, but easily separated; the structure is not uniform, etc.

The wart is painful (while calluses rarely cause severe discomfort). In addition, trauma from the plantar wart’s blood oozes. Any person can distinguish them from corn on this basis.

Seborrheic (senile) warts initially have a negligible value, usually, they are unpainted and even translucent. With time, the shape, size, and color change. They become oily, pink, and sometimes brown. It takes several years, or even decades, to fully mature. They can be found on the head, arms and back, they are easily confused with the mole.

Be attentive to neoplasms and know how to distinguish a birthmark from a wart:

The most dangerous form of possible neoplasms caused by HPV is the condyloma. They appear on the mucous membranes of the genital organs, less often – on the eyes and in the mouth. They can be either single or multiple.

They have an elongated pointed shape and a pink hue. Such warts often provoke the development of cancer, namely cancer of the penis, and cervix.

Important: Condylomies should be observed by a dermatologist and removed at the first changes.

How to Differentiate Warts and Moles

Seborrheic warts are not the only formation that can masquerade as a mole. Any papilloma is a benign growth on the skin, which can also be mistaken for a nevus. A wart can cause different strains of the same virus, but in any case, it is not always possible to distinguish it independently from other growths. 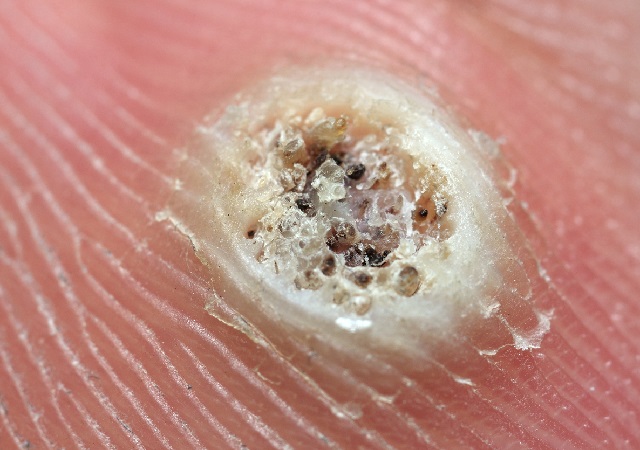 It is important to know the difference between a birthmark and a wart. First of all, you need to pay attention to the size of the built-up edge. Moles can be as barely noticeable, and completely cover one of the parts of the body. But the size of the papilloma is kept within the boundaries of 2-15 mm. But, if it is traumatized, the papilloma increases significantly (up to 6 cm).

The structure of these formations is different, the birthmark is dense, and the papillomas are loose and contain vessels. If we consider the peculiarities of the arrangement, the birthmarks, like warts, appear throughout the body, it is difficult to distinguish them from this feature. Nevi are symmetrical. The shape of the papilloma can be any.

Even a small lesion on the skin is a cause for concern. Self-diagnosis gives only a rough estimate. Therefore, if you have even the slightest doubt, you need to seek advice from a specialist. Only an experienced dermatologist, having verified the build-up on specialized equipment, will be able to reliably determine its nature.

How Do Warts Form

The virus of the papilloma penetrates into the body in 3 steps:

After the virus penetration, it remains in the human body for almost a lifetime, and these unpleasant skin rashes become closely related to the emotional state of the patient with the virus. This means that any stress, fright or emotional shake can trigger the occurrence of warts. Millions of people have no idea that they have already been infected until they notice the visible manifestations of a viral infection – warts themselves.

Important: Warts can be of different sizes – from 1-2 mm to 15 mm, depending on the type and place of its formation.

It is also possible to see the merge of several warts that can form fairly large tumors of a conical or semi-spherical shape, with a wide base. With time, the color of the wart, initially the same as the color of the skin, becomes brown and even black. To a large extent, this color is due to dirt that easily adheres to the rough surface of the wart.

How Do You Get Warts

This virus is transmitted from one person to another during direct contact – for example, handshakes. The incubation period is different: it can range from 1 to 6 months. Vectors of the papillomavirus can be objects of common use – door handles, appliances in the office, etc. The virus that causes warts lives in the outer world for no more than 3 hours, but this time is enough to ensure that one more person is at risk.

The most common 5 ways of getting warts are the following:

Infection with the papillomavirus occurs most easily if a person has sweating. A person is at risk if he/she often does work like hand washing, cleaning, etc.- a lot of small injuries are formed on the skin. The most favorable condition for the virus that causes warts on the soles of a person is heat and moisture. The fashionable footwear like sneakers (or other synthetic shoes) are just an ideal condition for the growth of warts. Especially “good” if these sneakers are tight.

The reason for the appearance of warts is the human papillomavirus (HPV), which affects almost every adult. You can have several types of this virus at the same time and do not guess about their presence. The prevalence of HPV infection in all countries is steadily increasing.

Infection occurs by direct contact with the skin and mucous membranes affected by HPV. Infection may penetrate through household items (nail files, nail scissors, etc.). Infection is also promoted by microtraumas of the skin, but the main cause of the manifestation of warts on the body is a weakened human immune system that is not able to control HPV.

Important: This is not a hereditary disease, but if the virus is in the parents’ home, then when cohabiting, it is transmitted to children as a result of constant, close contacts.

Changes in the Wart which Should Cause a Special Concern

The indication for wart treatment is their potential hazard to health or expressed cosmetic defects as well as permanent injury formation, discomfort and pain in the area of the localization.

If you have detected wart, you should consult the doctor in the following situations:

Important: A favorable condition for the appearance of warts is a weakened state of the body, which can lead to stress, lack of sleep, poor immunity, malnutrition.
Back